Timothy has been told  his whole life not to go near the wood burning stove at Grandpa and Nana's. He has even been known to warn other people that it's a "hot candle", or an "ouch fire". But, for some reason he decided that he just had to touch it this time.

I saw him circling it curiously and cited the old familiar warning; "Tim that's hot. Don't touch." and watched as he again circled curiously and decided, to his own downfall, to try and out-smart me. Did he touch it? Of course not! He just went up to it and smelled it- and got a nice burn for his trouble. 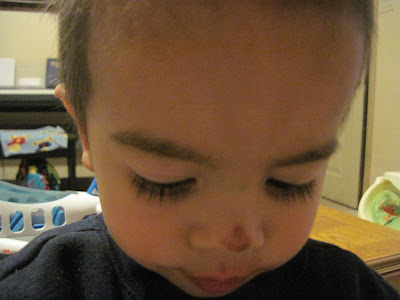 We did, however, learn two important lessons. 1) He is not smarter than Momma.
2) Even testing the boundaries has consequences. He now has to spend the next two weeks looking like either the Scarecrow from The Wizard of Oz or Raggedy Andy...I'm not sure which.
Posted by Amanda at 5:56 PM