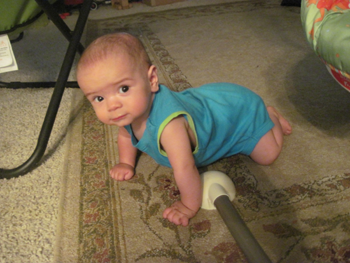 Look whose on the move! Yikes! Now that Nathan can somewhat crawl and hold toys his big brother actually wants to play with him. Tim has actually asked if he could play with Nathan when he's done with his pears (Nathan's baby food). This morning he was a singing a song about playing nice with Nathan, which was a bit of a joy to hear. 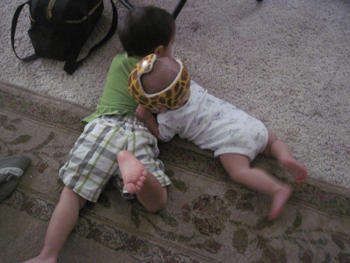 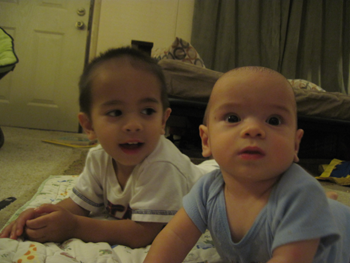 Timothy is constantly surprising me with the way he thinks and the things he says. Last night he was screaming that there was "an octopus with two legs" in Nana's dining room. He was putting his hands together and making them walk like a spider, and sure enough, when we went to see the two-legged octopus it was a spider. Eight legs, two legs...it's all the same.Besides, they both have eight legs, so he was on the right track.

This morning Tim was jumping on MY bed and shoved me off and told me to "get out my Timmy room!"...news flash, buddy, you're bed is in MY room! 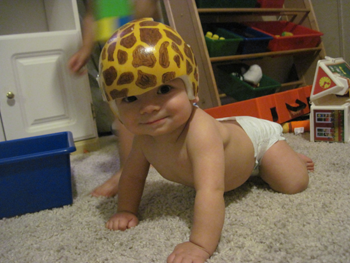 Now that Nathan is on all fours his Big Brother got the idea in his head that Nathan was offering him a Horsey ride. After running out of the kitchen to unsaddle Nathan we three had to sit down and have a talk about how babies learn to walk....they aren't offering horsey rides!