I Can Sit, and Crawl, and Eat!

Nathan has been jumping all kinds of milestone hurdles in the past month. He's able to crawl or drag himself just about anywhere he wants and is spending some time in the walker.

He can also sit up without support for almost 5 minutes! Every day he's able to sit longer and hardly totters at all.

AND he's already over 14 lbs! That's because his doctor said to feed him however much he'll eat. At 7 months he's already eating 3 jars of baby food a day, cereal, baby snacks, and still breastfeeding! No wonder he's tripled his birth weight!

His brother is changing a bit too. Timothy has taken on this aggressive, alpha-male attitude as of late. Lately, he just says what he's going to do, rather than ask. He thinks that he rules the room, can just drag kids over to play with him, and has taken to calling Nathan by his full name when he's angry.
"Nathan Totas! Don't touch choo-choo!" "Nathan Totas! No climbing!" (He can't say Thomas.)

I'm guessing it's just a phase because several of the boys that we know, who are his age, have taken on the same Macho attitude. Library day has been interesting these past two weeks...with all of these little Boss-men taking charge and swiping each other's toys!

Hopefully he'll get back to his normal, compliant (although mischievous) self. Soon!

Here are my favorite pictures from this week: 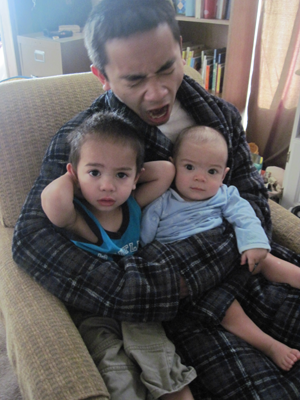 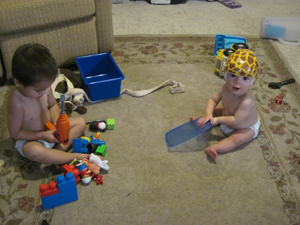