The week before Christmas I was approached by a friend and asked to make 6 crochet hats for her grandchildren. I was pretty excited because I've never been paid to crochet and the hats were for 5 little boys and a girl so I could really experiment and have fun. 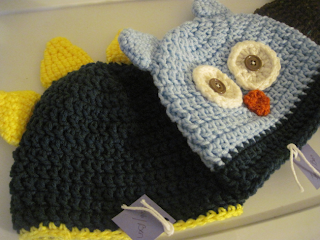 I made two hats with the dino spikes, two owl hats, a teddy bear for the baby, and a simple flower one. 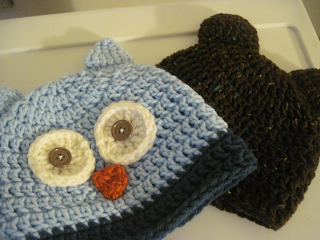 Then I labeled them up and and took some pictures. This was my first time doing the owl hats. I wanted to do more on them but she had told me to keep them simple. Not bad, huh? 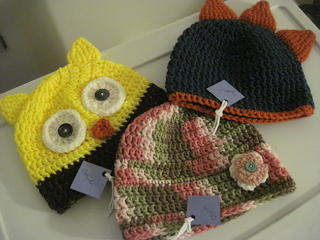 I keep trying to get some pictures of Nathan's four teeth but can't seem to catch him in time. I thought I'd get a good picture but I forgot to buckle the highchair in the excitement of snapping the perfect "smile". 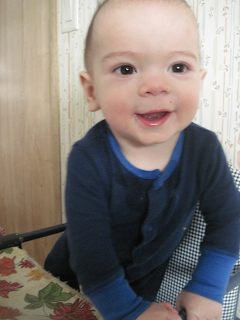 Timothy said, "It's okay, you can camera my teeth mom."  Cutie! 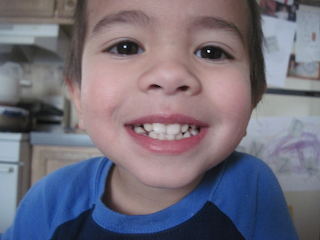 Nathan has been a little cranky, but he's so easy going every other day so we're letting him be miserable and pampered a bit. He's working on 3 more teeth. Poor guy.

Mr. Conductor has been in an awesome mood. Here are some pictures of his deluxe track in action. 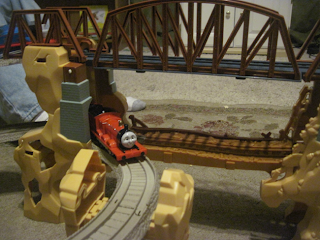 Nana and Grandpa really know how to pick out a track! Water slide, bridge, spiral ramp and all! He was in chugga-chugga heaven! 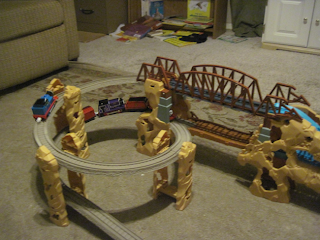 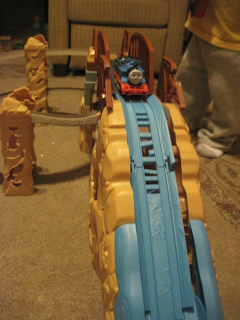 This morning we were cleaning up toys together and he looked at me and he said- "Mom, you're a really useful engine."

That is a common phrase in the Thomas books and movies. I got all choked up to hear my Little Buddy voice his appreciation for me. 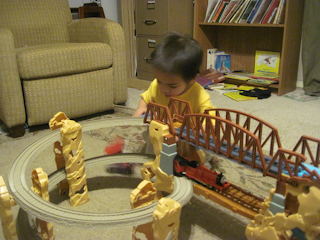 Of course he was back to his turkey-self moments later. We were out running errands together and we usually listen to Tim's VeggieTale Sunday Schools Songs in the car when Daddy isn't with us...Matt can't stand Larry's voice. Our car has a CD changer so when one disc is over it just plays the next disc instead of restarting. After the first song on another CD Timothy asked me to put the VeggieTales back on.

I told him to just listen to the CD that was playing. His reply shocked the socks off me- "I'll flick you. I'll flick you if you not put VeggieTale CD on."  Boogerhead! 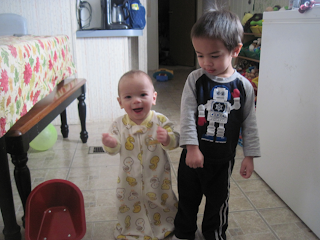 Check out this awesome picture!!!!  My two boys standing side-by-side! Timothy will be 3 years old this month! And Nathan is standing!!