Most people who know me know that I have a habit of always doing certain things a certain way. I like things the way I do them and it's very hard for me to watch someone performing the same task in a different order or method. I can't sleep if the blanket tag is at the head of the bed instead of the foot- I will literally yank the blanket off Matt and switch at 2am just so he won't make fun of me about it. I have to have things symmetrical, in our house, if it's not even it's not gonna happen. I can't be in the kitchen when Matt is cooking, it stresses me out that everything he does is out of "order" or unplanned. Matt says I have "control issues". To which I often say, "I'm just a very particular person."

I didn't really get that Brooke Shields "not tomato butt" commercial until last night when I found myself sitting in a restaurant separating all of the white pieces of the lettuce from my salad.  They have a bitter after taste and I never use the center of the lettuce head at home. I like things the way I like them.

It never ceases to amaze me how quickly my children have developed their own character traits, tweaks,  and idiosyncrasies. Timothy seems to be a "particular person" as well, especially about his sleeping routine- we're still watching Nathan.

Example: Timothy hates, hates, hates tomatoes. Sunday we went out for pizza and brought some leftovers home. While I was in the other room Timothy decided to do us all a favor and remove all the tomatoes from the pizza. Sounds familiar. 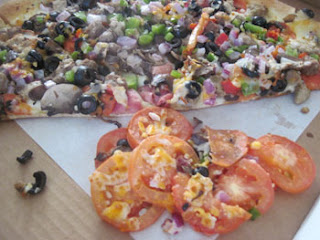 Last week Timothy decided to go on a no-pants strike. 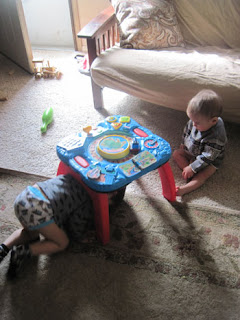 He spent about 3 days straight without pants, except at bedtime when it was 25-30 degrees outside.
I asked Timothy why he wouldn't wear pants the other day and he said that he was afraid of pants. Okay? 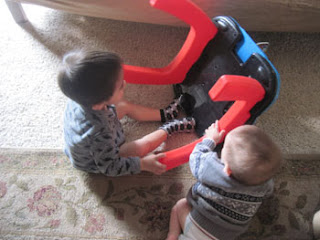 Nathan has already been protesting pants for a while, but I think it may just be a baby thing. Timothy was known to crawl out of a pair of pants as quickly as he got them on. 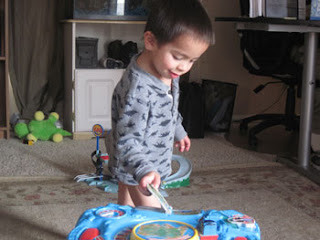 Even when Nathan is in footed pajamas he somehow manages to escape the bottom half! Little stinker! 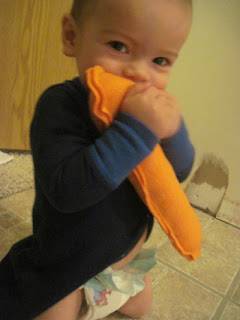 Another one of Nathans quirks is his strong refusal to wear two shoes or a left sock.
He has this angst for a left sock, in the picture it's the right foot, I know, off day.  Typically as soon as we get him from his car seat his left shoe and sock are gone, we may be in the store and have someone stop us to return a left sock. I have even had flustered nursery workers telling me that they chased him down the whole hour reapplying the same sock until he finally chewed on it- and they couldn't put him in wet socks. 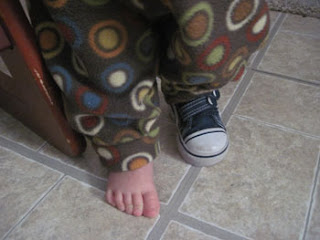