I just want to thank everyone who prayed for us, emailed, or called yesterday. For those who don't know; Nathan woke up on Sunday morning and wouldn't eat his breakfast, had some lunch, but refused dinner. At church he wouldn't play with anyone so after I taught my class I did nursery and kept him again in the evening. I thought it was due to a molar he was working on and excused his lack of food or activity as teething. Yesterday (Monday) he woke up with a rapidly rising fever at 5am yesterday crying and moaning. His fever peaked at 103 deg and he would not stop crying so at 9am we called the pediatrician.

He wasn't responding to Tylenol so, at the pediatricians suggestion, we switched to Advil and that brought him down to 99deg. It wasn't until 8:30 last night that he was back to a normal temperature. The doctor isn't sure why he was so sick and they ran some tests but when he can't talk about his symptoms it's hard to diagnose a problem. 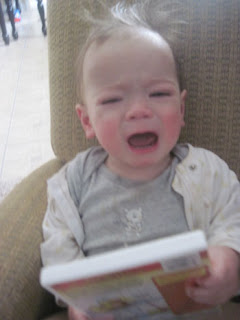 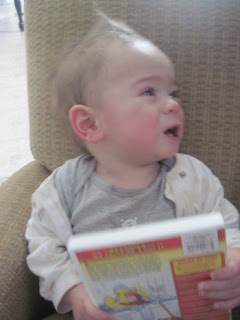 He is still a bit cranky and listless but he is making an effort to eat and play. He's napping right now and should be 100% by tomorrow.

Thank you to all of my family and friends who prayed for us. It's a real blessing to know I can send a quick email en route to the doctors and have a prayer chain going instantly.